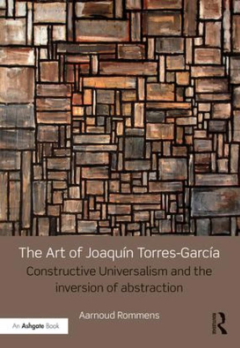 The Art of Joaquín Torres-García

Constructive Universalism and the inversion of abstraction

‘Mirroring Joaquín Torres-García’s own famous Inverted Map of the South, Rommens’s ambitious and comprehensive study of this Uruguayan artist turns the history of abstract painting on its head. Rommens provocatively argues that, by imaginatively locating the origin of abstraction in Inca art, Torres-García’s Constructive Universalism revises and reverses our understandings of the avant- garde as an essentially European phenomenon.’

A highly innovative and truly interdisciplinary reading that reinterprets all the great issues of avant-garde as well as postcolonial studies. Rommens discloses the hidden contradictions in the work and thinking of a key artist of the first half of the twentieth century, while offering new insights on primitivism and abstraction.’
Jan Baetens, University of Leuven

After studying and painting (for decades) in Europe, Torres-García returned in 1934 to his native home Montevideo with the dream of reawakening and revitalizing what he considered the true indigenous essence of Latin American art: Abstract Spirit.’ Rommens rigorously analyzes the paradoxes of the painter’s aesthetic-philosophical doctrine of Constructive Universalism as it sought to adapt European geometric abstraction to the Americas. Whereas  Torres-García’s theories as self-contradictory, Rommens seeks to recover their creative potential as well as their role in tracing the transatlantic routes of the  Torres-García’s artworks as a critique on the artist’s own writings, Rommens reveals how Torres-García appropriates the colonial language of primitivism to construct the artificial image of ‘pure’ pre-Columbian abstraction. Torres-García thereby inverts the history of art: this book teases out the important lessons of this gesture and the implications for our understanding of abstraction today.